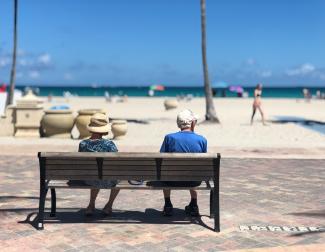 5 Financial Factors to Consider when choosing a Retirement destination

Every American eagerly awaits the day when they can work a little less and relax a little more. Retirement has been a dream for many Americans born in the post-World War II era. Pensions from government and private jobs, combined with Social Security, made it easy for generations of Americans to eventually retire comfortably. For those who saved a little extra, retirement might even include a relocation to a new destination. Before making such a big decision though, it is important to think about the financial implications of a move during retirement. Everything from tax structures to the cost of living and healthcare could change drastically depending upon the locale you choose.

How often do you consider the impact of groceries, utilities, and other necessities have on your budget? During retirement, many individuals live on tight budgets and have to pay attention to changes such as the cost of living. The amount it costs to heat or cool your home, buy groceries, and fill up on gas can all make or break your retirement budget over time. For example, Florida residents have some of the lowest fuel costs in the country, but utilities could offset those savings as you try to cool a home for long periods of the year against the heat and humidity of the Sunshine State.

This might be the most important financial factor to consider before you move to a new location during retirement. Housing costs vary wildly across the country, and beyond the median home price in any given location, you'll need to think about how much taxes on homes could set you back. Some states have no property taxes, while others have extremely high property taxes to offset a lack of income taxes. Finding the right balance is important.

Speaking of taxes, there are a myriad of tax pitfalls you could run into if you aren't careful in relocating. The three most important to focus on are individual income taxes, property taxes, and retirement benefit taxes. Alaska, Florida, Nevada, South Dakota, Texas, Washington, and Wyoming are the most tax-friendly to retirees overall, but even among these states, the taxes can vary.

For example, Florida does not tax Social Security benefits, has a minuscule .90% property tax rate, and does not have an income tax. This makes the Sunshine State a favorable place to live. Moving out of Florida to other seemingly tax-friendly states might seem like a positive, but it may not work out in the end. Consider Hawaii, another beach destination as an example. Hawaii doesn't tax Social Security benefits, but it does have a .29% property tax and a rather high 7.2% income tax rate.

Another important financial factor to consider is the access to and cost of medical assistance. Retirement is only as fun in as much as you're healthy enough to enjoy it to its fullest. Here, the Sunshine State does not hold up as well as it does in the tax arena. You might save money on taxes in Florida, but the state ranks among the most expensive in the US for healthcare. Conversely, Hawaii, Iowa, Minnesota, New Hampshire, and Washington DC rank among the best overall states in the US for healthcare according to AARP.

Finally, don't overlook the costs associated with your favorite hobbies and interests. While some places may be affordable to live and offer great healthcare, such as Minnesota, you'll be stuck inside through most of the winter and won't have access to nearby beaches. If these are things you want, you'll incur extra costs traveling more to find those during the winter and fall months in such a location.